in Matthew 5:13, Jesus said “ye are the salt of the earth…” we all know how important salt is, the usefulness of salt cannot be overemphasized, but for the purpose of this article (praying for Nigeria), I will talk about the power of salt to preserve from decay.

When I was younger, I often wonder why they do sprinkle salt on locust beans, but later on, I realized it was to preserve it, to prevent it from getting spoilt and rotten. Now, Jesus said “ye are the salt of the earth”, that is, we as believers are to prevent the earth from decay. But it is sad that we, or say a majority of us are not in tune with this instruction, all we do is complain, rant, make excuses, some Christians will even curse the leaders for their own shortcomings.

But this is a reason we must pray, and in particular, pray for mercy upon our land. There was a King in the Bible named king Manasseh, he was the son of King Hezekiah, but unlike his father, he was a wicked king. Now, King Manasseh was not the first evil king in Judah, but he was the king that made Israel sin, so much that the Lord promised never to forgive them.

What could they have done to make our ever merciful God decide to send them on exile through the next king, King Josiah was a faithful king who loved and served the Lord with all he had? The answer is in 2 Kings 21:16 (NIV)

Moreover, Manasseh also shed so much innocent blood that he filled Jerusalem from end to end–besides the sin that he had caused Judah to commit, so that they did evil in the eyes of the LORD

2 Kings 24:4(NIV)
… including the shedding of innocent blood. For he had filled Jerusalem with innocent blood, and the LORD was not willing to forgive.

That was what he did that no king in Judah has ever done, he reigned for 55 years, he had so much time to fill the land with blood and the land suffered for it. Remember Cain? Remember how the blood of the innocent Abel was crying for vengeance? 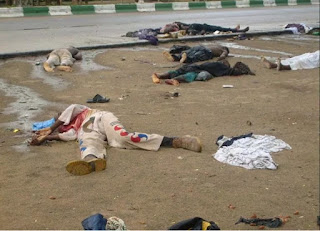 How filled with blood is our land today? Can we really count how many innocent lives that have been lost to terrorist attacks and ritual killings? Of course, you are not Boko Haram that has been shedding blood, but the blood that has been shed will cry out for vengeance, vengeance against our land, the land where we all dwell.

The nation is going into decay, and the Salts of the earth are looking elsewhere, we are busy hustling, trying to make a living and make ends meet. When are we going to rise up and say enough is enough?

When are we going to start pleading for mercy for our land?
Looking at the way things are, we may want to blame our woes on some people, but have you wondered why we seem to be moving from one trouble to the other? Some years ago, it was the Niger Delta militant group, then Boko Haram terrorist group, then the  Shitte, some lives were lost during the heat of Biafra protest.

Not to forget, now the economy is in recession, we may want to play politics and blame our leaders, but have you asked yourself why we have never been lucky with good, sensitive and visionary leadership?

When are will going to start permitting and prohibiting? Maybe you don’t know, if the believers continue to curse these leaders, it is the evil that we speak that we are permitting, but when we pray when we interceded, we prohibit evil. Or should we just sit and complain on and on while our land suffers famine, drought, and war?

I urge, then, first of all, that petitions, prayers, intercession, and thanksgiving be made for all people for kings and all those in authority, that we may live peaceful and quiet lives in all godliness and holiness.
1Timothy 2:1-2 (NIV)

I am a trained journalist, an aspiring speaker, a writer, a counselor, a teacher (of the scripture), a social media enthusiast, and of course, a Jesus lover. Do you wish to know me or have something to share with me? Then let’s chat on Whatsapp – +2348064395985

5 Incredible Ways You Show You Are A Selfish Christian

5 Obvious Reasons I Hate Religion, And You Should too